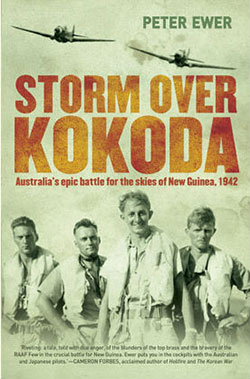 In February 1942, thanks to pre-war political interference, the Royal Australian Air Force faced the Japanese onslaught without modern fighter planes, and only a handful of bombers and long range flying boats. The result was devastating – Darwin was bombed without opposition by the RAAF, and the Japanese stood on the shores of the Coral Sea, ready to raid the Australian east coast.

Enter 75 Squadron RAAF. Hastily equipped with Kittyhawk fighters, and led by one of the great combat leaders in RAAF history, John Jackson, 75 Squadron arrived in Port Moresby. For 44 heroic days, the handful of Kittyhawk pilotes flew and fought themselves to standstill. Jackson himself was tragically killed, fighting to preserve the honour of his unit, slandered by deskchair leaders who called his men cowards. ‘Storm over Kokoda’ sets the record straight, paying due tribute to the men who kept New Guinea in allied hands for 2 vital months until help arrived to keep Australia safe.